I am excited to share the front cover art for the upcoming Race for the Flash Stone, the second installment in The Anlon Cully Chronicles, targeted for release in late April 2017. 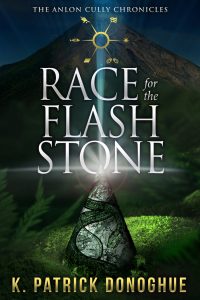 Yes, the cone-shaped object depicted on the cover is the Flash Stone. Called the Tuliskaera (two-leh-scare-a) by the ancient civilization featured in the novel, the Flash Stone is a precision tool that houses the power to cut and shape large rocks. In dire circumstances, it can also serve as a fearsome weapon.  The Flash Stone is coveted by the villains in the story for its awesome capabilities…as well as a closely-guarded secret power 😉

Stay tuned for future Race for the Flash Stone pre-release updates by joining my email subscriber list by clicking here. Next update scheduled for Thursday, February 23, 2017 (a sneak preview of the story synopsis).