A harrowing tale of space exploration turned survival nightmare. Filled with aliens, science and suspense, Magwave blends the futuristic science fiction of Arthur C. Clarke with the twists and intrigue of a Tom Clancy thriller.

Fresh off their historic discoveries on the Jupiter moon Callisto, the crew of the Rorschach Explorer and their colleagues in Mission Control should have known better. Space is not a lifeless vacuum.

Dark and forbidding, it is a jungle where the rules of survival are no different than those on Earth: Keep your head on a swivel. Trust nothing you think you know. Kill or be killed.

Icy and vast, it is an ocean where the divide between life and death is often more dependent on forging alliances than individual prowess. There is always something bigger, faster, smarter and hungrier than you.

Spartan and unforgiving, it is a desert where the daily struggle for existence requires constant ingenuity and adaptation. Oases are few and far between and there is no respite from danger.

But the crew was lulled by an easy start to Rorschach’s maiden voyage and they let their guard down. And sure as the Sun rises, savage predators emerged from the darkness.

Magwave, book two of the Rorschach Explorer Missions series, continues the story first hatched in the series’ novella prequel, UMO, and further explored in book one in the series, Skywave. 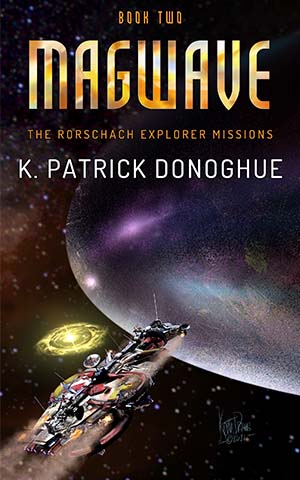