Anlon trained his gaze on the three pocket-sized notebooks. “I’m pretty sure they’re important. Maybe more important than the Waterland Map. Devlin was definitely hunting for something, but the more I’ve thought about it, the less I’m convinced he was after the Stones…”

In this thrilling archaeological mystery, scientist Anlon Cully hunts for evidence of a long-forgotten civilization, a race of ancient mariners who possessed a sixth-sense lost to the ages — the ability to detect and interact with the Earth’s magnetic field.

With this special gift, the prehistoric civilization crafted stone tools with astonishing powers. Inexplicably, the advanced culture vanished from the pages of history…until a set of their special stones was discovered by Anlon’s uncle, archaeologist Devlin Wilson.

Devlin was brutally murdered, leaving behind the stones and a set of confounding clues. An ancient map, a curious statue and three cryptic journals. Somehow, the clues are linked. But how? That’s the puzzling mystery Anlon must solve.

And time is not on his side…for there are others seeking to solve the same riddle…heartless fiends who crave the most fearsome of the magnetic stones…the Flash Stone.

Forged as a building tool, the Flash Stone can cut and shape rock with astounding precision. In the wrong hands, however, it can be wielded as a horrifying weapon. And it is endowed with yet another gift, a secret power known only to those who unravel the mystery.

Joined by friends Pebbles McCarver and Jennifer Stevens, Anlon races to solve the mystery and find the Flash Stone before it falls prey to savage villains trailing close behind. 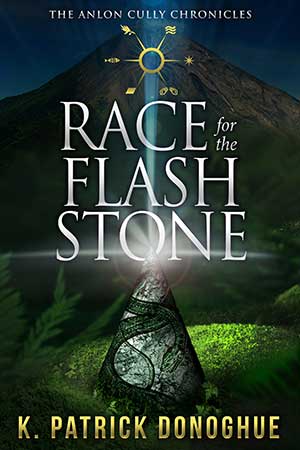