No one knows what to make of the mysterious clicks.

To Ajay Joshi, the amateur astronomer who discovered the strange sounds with his radio telescope, the clicks represent proof of aliens on Callisto, a moon of Jupiter, a theory dismissed as quackery by space agency radio experts. They contend the clicks are nothing more than terrestrial interference, so-called skywaves, or similar electromagnetic interference emanating from Jupiter or Callisto.

To Dr. Kiera Walsh, an aerospace engineer introduced to Ajay and his findings, the consistent, repetitive pattern of the clicks points to the possibility of a lost Martian probe caught in Callisto’s orbit. She shares this view with her employer, billionaire and space exploration privateer, Augustus Amato, and is surprised to learn Amato disagrees with her conclusion. He believes the clicks herald something more ominous orbiting Callisto.

Compelled to learn the true source of the clicks, Amato launches a fleet of experimental probes to investigate the Jovian moon. A mission that produces a string of startling discoveries, revelations that shake the space exploration establishment to its core and spark a controversial race to preserve the discoveries before they are destroyed or suppressed.

Skywave, the first book in the riveting new sci-fi thriller series from mystery-thriller author K. Patrick Donoghue, leads readers on an epic journey that challenges conventional views of ancient aliens, the search for extraterrestrial intelligence and humankind’s place in the universe. 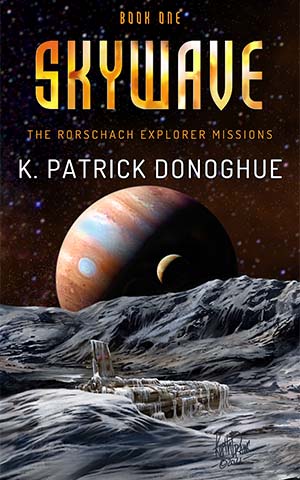