Buckle up for this chilling novella tale of first contact! When three probes sent to Mars suffer suspicious catastrophic failures, a clandestine manned mission is dispatched to investigate the probes’ wreckage for clues to explain their demise.

The manned mission is led by Lieutenant Colonel Avery Lockett. He is joined by flight engineer, Captain Nick Reed, and mission specialist, Dr. Christine Baker. Together they embark on a dangerous journey aboard the spaceship Cetus Prime - dangerous because they know what awaits them around Mars. UMOs, or unidentified magnetic objects.

UMOs are believed to be an electromagnetic life form feeding on ions caught between Earth’s magnetosphere and ionosphere. The elusive creatures appear as nothing more than small bright lights, but they are capable of supersonic speeds and non-ballistic motion. Space exploration authorities have, at various times, provided benign explanations for these bright lights; melting frost shed by spacecraft caught in sunlight, solar wind particles or flaming meteors bouncing off the Earth’s atmosphere, to name a few. Anything but an alien life form.

Disavowed for decades, the UMOs had been viewed as harmless, amoeba-like blobs that existed only around Earth, as none had ever been observed by deep space probes to other planets in the solar system. But that perception changed with the final photographs snapped by one of the doomed Mars probes. The pictures showed a swarm of UMOs descending upon the probe in the moments before communication was lost. Instrument readings from the same probe showed huge spikes in electromagnetic radiation in its last transmission.

No one knows for sure what happened to the Mars probes, but authorities speculate the UMOs destroyed them. Now, Avery, Nick and Christine must travel sixty-five million miles to Mars and gather evidence to confirm what destroyed the probes without attracting a swarm of the lethal creatures. For if a swarm of the UMOs appears, Cetus Prime is ill-prepared for fight and too slow to escape.

UMO, a novella, is a prequel to Skywave, the first book of The Rorschach Explorer Missions, a new sci-fi thriller series from mystery-thriller author K. Patrick Donoghue. The prologue from Skywave is included as a free bonus chapter in UMO. 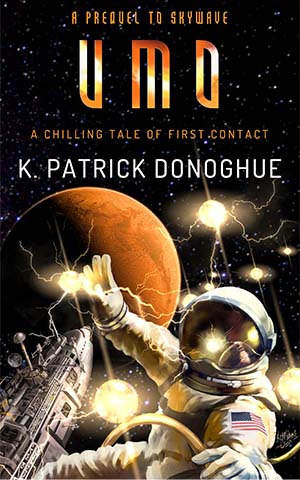